June 22 (UPI) — A Canadian special elite forces member may have set a world record by killing a suspected insurgent in Iraq in Iraq with the world’s longest kill shot, according to a report.

The Globe and Mail reported that a member of Canada’s Joint Task Force 2 set the world record for longest sniper shot to kill a human being. The unnamed sniper is said to have killed the suspected insurgent from a length of approximately 11,319 feet. The bullet traveled for 10 seconds before penetrating its target.

“The shot in question actually disrupted a Daesh [Islamic State] attack on Iraqi security forces,” a military source told the paper. “Instead of dropping a bomb that could potentially kill civilians in the area, it is a very precise application of force and because it was so far way, the bad guys didn’t have a clue what was happening.”

If the length of the reported shot proves to be accurate, it will have shattered the previous record set by British soldier Chris Harrison, who killed two suspected Taliban members in Afghanistan in 2009 from a distance of 8,120 feet.

In March, Canada’s defense minister Harjit Sajjan announced that the country’s military will extend its operations in northern Iraq until June 30.

The Canadian military has been supporting Kurdish forces against Islamic State in its attempt to take back the region, including the battle for the city of Mosul. 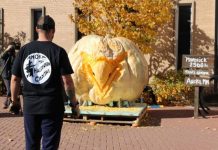 Largest pumpkin in the U.S. being carved into world’s largest jack-o’-lantern