Weinstein, 68, is being isolated at Wende Correctional Facility in western New York, officials said Sunday. He is allegedly one of two inmates at that correctional facility who have tested positive.

Weinstein was sentenced to 23 years in prison on March 11, two weeks after a jury convicted him of sexual assault and rape. He was found guilty of one count of first-degree criminal sexual act against the production assistant Mimi Haleyi in 2006 and one count of third-degree rape against the hairstylist Jessica Mann in 2013.

Officials familiar with his situation said it is thought Weinstein was positive for the virus when he entered the state prison system last Wednesday from Rikers Island, a New York City jail, the report said.

Weinstein was sent to Wende, where the prison system operates an intake center for new state inmates, the Niagara Gazette said. Inmates are typically sent to other facilities from there after medical and security concerns are assessed.

During Weinstein’s trial, he had been alternating his time between Rikers Island and a New York City hospital, where he was treated for high blood pressure and chest pains.

Michael Powers, president of the New York State Correctional Officers and Police Benevolent Association (NYSCOPBA), told the Niagara Gazette he could not comment on Weinstein’s situation or elaborate on any inmate’s health record due to privacy rules.

The Department of Corrections and Community Supervision, the agency overseeing state facilities, stated last week it is suspending all visits to prison inmates to counter the spread of the virus.

The officials who said Weinstein has tested positive spoke on the condition of anonymity, adding they were not authorized by the corrections agency to publicly comment on the situation, the article said. 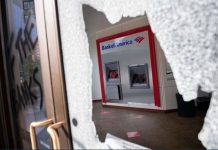