HEBRON, West Bank, Oct. 25 (UPI) — Israeli police on Sunday said they shot and killed a Palestinian woman who attacked them with a knife in the West Bank, but at least one witness said she was an unarmed and frightened teenage girl.

The incident occurred at a border checkpoint in Hebron, a town in the West Bank.

“They asked her to identify herself and she suddenly took out a knife, started to approach them while shouting at them,” police spokesman Micky Rosenfeld told CNN. “The police fired accurately and neutralized her. There are no injuries to the Border Police force.”

A resident of the town who spoke on condition of anonymity told CNN he witnessed the encounter while standing in line.

“There were seven or eight soldiers around her,” he said. “The soldiers checked her belongings in a school bag. She looked like she was around 14 years old. She went through a metal detector. In the school bag they found nothing and asked her, ‘Where’s the knife?’ She said, ‘I don’t have a knife.’ Then they fired between her legs. She was terrified and moved back half a meter or a meter. She raised her arms in the air saying ‘I don’t have a knife.’ Then they shot eight to 10 bullets, but I don’t know exactly who was shooting. Then she fell on the ground.”

WAFA, Palestine’s official news agency, also characterized the suspect as a schoolgirl, reporting Israeli soldiers denied medical crews from providing her with treatment as she lay on the ground. The soldiers also reportedly shut down the nearby Ibrahimi Mosque, also known by its Jewish name, the Cave of the Patriarchs.

The death brings the amount of Palestinians killed by Israeli security forces in October to 58, while about 2,000 have been injured in similar incidents across West Bank, Jerusalem and Gaza, according to WAFA.

Meanwhile, at least 10 Israelis have been killed in stabbings, shootings and other attacks by Palestinians.

Violence between Palestinians and Israelis has been on the rise in recent week due to tensions over Jerusalem’s al-Aqsa Mosque, also known as the Temple Mount, its Jewish name.

Under current law, Jews are not allowed to pray at the site — a measure opposed by some right-wing Israeli politicians. Palestinians fear a change in the current arrangement, which the Israeli government denies.

Clashes between Israeli security forces and Palestinians broke out at the mosque last month, with Israel saying masked demonstrators had barricaded themselves within and Palestinian media arguing Israeli forces stormed the mosque after dawn prayers.

Since then a series of violent incidents have occurred across the region. Xinhua news agency reports clashes between stone-throwing Palestinian demonstrators and Israeli security forces in the West Bank village of Si’eer, north of Hebron, on Sunday.

On Thursday an Israeli soldier killed a Jewish civilian in Jerusalem after the two mistook each other for an Arab attacker, the BBC reports. Earlier in the day police say two Palestinians were shot and killed after injuring an Israeli in a knife attack at a bus stop.

Three days prior, authorities killed a 21-year-old Arab-Israeli citizen accused of stabbing and shooting to death a 19-year-old Israeli soldier — but not before anEritrean man was shot and killed after being mistaken for the attacker.

Last week, Abbas requested the UN provide “international protection” for the Palestinian people, a notion that Netanyahu has rejected.

On Saturday, U.S. Secretary of State John Kerry said Israel and Jordan had reached an agreement aimed at reducing tensions around the al-Aqsa Mosque. As part of the deal, Israel reiterated that the current arrangement disallowing Jews to pray at the site would stand, and a video surveillance system would be added.

Netanyahu is reported to have said the surveillance system was in Israel’s best interest, as it would “show where the provocations are really coming from.” 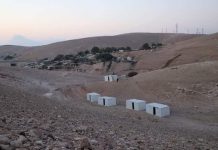 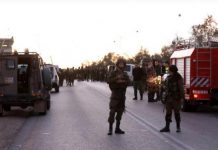