July 3 (UPI) — Gunmen opened fire at a crowd of people outside of a mosque in France, injuring eight people.

The shooting, which has not been ruled an act of terrorism, took place in Avignon, Provence in southern France at approximately 10:30 p.m. Sunday. Among the injured was a 7-year-old girl.

Witnesses said worshipers began to run when two men exited the vehicle with firearms and approached them.

“It was a black Renault car,” one witness said, adding: “There were four individuals, only two of them, who were seated in the back, stepped out and started shooting at everyone.”

Police said the shooting might have been gang-related and not an act of terror against Muslims.

The mosque shooting comes just three days after a man attempted to ram his car into a crowd of people in front of a mosque in the Paris suburb of Creteil. However, barriers placed in front of the mosque prevented any serious injuries.

The man reportedly said he wanted to attack Muslims for past terrorist actions by Islamic extremists.

On June 19, a British man named Darren Osbourne, 47, rammed his van into a crowd of Muslims leaving a mosque in London, killing one person and injuring several others.

Osbourne was later arrested for terrorism-related murder and attempted murder. 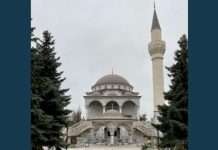