Hamilton County District Attorney Joseph Deters is expected to say today whether the former University of Cincinnati officer will again face murder and manslaughter charges — or possibly a different indictment — for the controversial death of Sam DuBose in July 2015.

A source close to the case told Cincinnati’s Fox 19 Monday that Deters will announce the decision at a news conference set for 10 a.m. EST.

Deters’ office had previously indicated that a decision on the matter would come at the next court hearing in the case on Nov. 28.

Tensing’s first trial ended with a deadlocked jury on Nov. 12. Deters must now decide whether to retry him on the same charges, pursue different charges with a new grand jury, offer a plea deal or dismiss the case altogether.

Jurors became deadlocked after days of deliberations, despite the fact that an initial straw poll found all 12 on the panel voted in favor of conviction. After deliberations, however, four had changed their minds and voted to acquit.

Tensing’s attorney, Stew Matthews, said the case should be dismissed and filed a written motion asking the court judge to find the former officer not guilty of the two counts against him.

“I still think it’s murder, and I think that we proved it,” Deters said after the first trial ended. “You are asking 12 lay people to try to make sense of very complicated legal instructions and things like that. We are going to look at what we did in this trial and make an assessment.”

The murder charge carries a possible life sentence, and the manslaughter count carries a maximum of 11 years in prison. 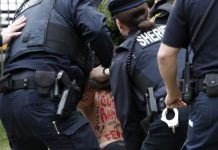 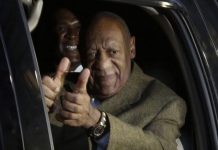