Arkansas Sen. Tom Cotton would become CIA director, according to The New York Times and confirmed by CNN and The Washington Post.

The Times first reported the changes will occur late this year or early next year, and were being developed by White House Chief of Staff John Kelly in consultation with other officials.

It wasn’t clear if President Donald Trump has approved the changes.

Trump was asked during a meeting Thursday morning with the crown prince of Bahrain, Salman bin Hamad Al Khalifa, whether he wants Tillerson to remain as secretary of state. Trump said: “He’s here. Rex is here.”

Tillerson was not Oval Office at the time, but The Hill reported he was at the White House a few minutes before the president spoke.

The Times reported White House officials were deciding whether to make the changes at once or spread them out. It wasn’t reported whether Tillerson, the former long-time Exxon Mobil chief executive, would be fired or resign.

In October, during an unscheduled news conference, Tillerson said he never considered leaving his diplomatic post and “my commitment to the president remains strong.” Those comments came after a report from NBC News said he nearly left his Cabinet job this summer after calling Trump a “moron” due to policy disputes.

One week before the news conference, Tillerson said the administration was attempting to enter diplomatic talks with North Korea but Trump remarked on Twitter, “I told Rex Tillerson, our wonderful Secretary of State, that he is wasting his time trying to negotiate with Little Rocket Man. Save your energy Rex, we’ll do what has to be done!”

While Tillerson’s relationship with Trump has become strained, Pompeo, a former Republican U.S. representstive from Kansas, has grown increasingly close to the president.

Pompeo delivers in-person intelligence briefings several days a week. CNN reported Trump frequently asks him to discuss other matters one on one.

If Cotton leaves the Senate, Gov. Asa Hutchinson, a Republican, would appoint a replacement to serve until the 2018 election.

Man arrested outside White House for threatening to assassinate Trump 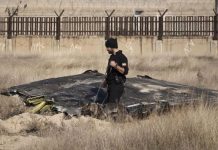