The Supreme Court confirmed that Stevens died at Holy Cross Hospital in Florida due to complications following a stroke he experienced on Monday, ABC News reported.

“He passed away peacefully with his daughters by his side,” the Supreme Court said.

Stevens served 35 years on the Supreme Court after being nominated by Republican President Gerald Ford in 1975 and was known for his votes to limit the use of the death penalty, uphold affirmative action and broadening Roe v. Wade.

Despite being nominated by a Republican, Stevens issued multiple dissents that leaned liberal over the course of his service.

One landmark dissent came in the Bush v. Gore case that halted the recount of Florida ballots in the 2000 election and allowed George W. Bush to win the presidency.

Stevens lamented that the five judges who voted in favor of Bush would lend credence to the “most cynical appraisal” of the Supreme Court’s work.

“Although we may never know with complete certainty the identity of the winner of this year’s presidential election, the identity of the loser is particularly clear,” he wrote. “It is the nation’s confidence in the judge as the impartial guardian of the rule of law.”

Stevens remained engaged in politics after retiring from the Supreme Court in 2010, writing a New York Times op-ed in March of last year calling for an end to gun violence and a repeal of the Second amendment.

He stated that the Supreme Court’s ruling that there was an individual right to bear arms, which he dissented, provided the National Rifle Association with a “propaganda weapon of immense power.”

“Overturning that decision via a constitutional amendment to get rid of the Second Amendment would be simple and would do more to weaken the NRA’s ability to stymie legislative debate and block constructive gun control legislation than any other available option,” Stevens wrote.

Stevens was born in Chicago on April 20, 1920, and graduated from the University of Chicago in 1941 after his family’s business went bankrupt during the Great Depression and his father, grandfather and uncle were indicted on charges of alleged financial misconduct.

He joined the Navy the day before Pearl Harbor was attacked and spent World War II stationed there as a signals intelligence officer.

After the war, he graduated from Northwestern University’s law school in 1947 and served as a law clerk for Supreme Court Justice Wiley B. Rutledge for the 1947-1948 term.

President Richard Nixon appointed Stevens to the Chicago-based U.S. Court of Appeals for the 7th Circuit in November 1970 and five years later Ford nominated him to replace Associate Justice William O. Douglas on the Supreme Court.

Stevens was awarded the Presidential Medal of Freedom by President Barack Obama in May 2012. 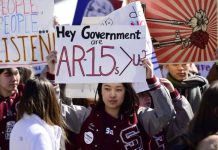