June 16 (UPI) — Two riders fell more than 30 feet from a roller coaster at a Florida park after it derailed from its track.

The Daytona Beach, Fla., Fire Department said it had a “busy night” on Thursday rescuing 10 riders from the Sand Blaster coaster at the Daytona Beach Boardwalk.

Firefighters found the coaster dangling from its track and two riders lying injured on the ground after they fell 34 feet. Four others were hospitalized.

The riders had been wearing seat belts on the coaster.

The Florida Department of Agriculture and Consumer Services said the ride was inspected Thursday.

The coaster opened in the boardwalk in 2013 after it was bought from a closed Delaware park in 2012. 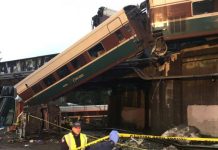