“The RNC is the political arm of the president and we support the President,” a senior RNC official said, CNN reported.

According to Breitbart, which first reported the RNC’s renewed support of Moore, the RNC told its Alabama members on Monday afternoon that financial support for Moore’s campaign would resume.

Moore will also get $1.1 million worth of campaign support from America First Action, a pro-Trump group, the Washington Post reported.

The RNC withdrew support for Moore’s campaign in November after several women accused him of pursuing romantic relationships with them while they were under the age of 18 and he was a district attorney in his early 30’s.

Moore denies the allegations, but the allegations come at a time when there is a national conversation on sexual harassment and many of the Alabama judge’s prominent GOP supporters have withdrawn their support.

But on Monday, Trump gave his unequivocal support for Moore, who is running against Democrat Doug Jones.

“Democrats refusal to give even one vote for massive Tax Cuts is why we need Republican Roy Moore to win in Alabama,” Trump tweeted. “We need his vote on stopping crime, illegal immigration, Border Wall, Military, Pro Life, V.A., Judges 2nd Amendment and more. No to Jones, a Pelosi/Schumer Puppet!”

Moore also took to Twitter to show Trump’s support for his candidacy, writing that the president told him, “Go get ’em, Roy!”

“Just got off the phone with President Trump who offered his full support and said he needs a fighter to help him in the US Senate. I look forward to fighting alongside the President to #MAGA!” Moore wrote.

The Alabama Senate election is on Dec. 12.

According to a recent CBS News/YouGov poll, Moore leads Jones by 6 percent. 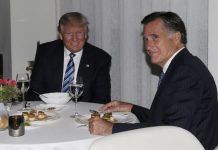 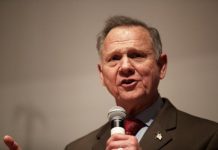