March 19 (UPI) — Russian leaders called Saturday for an investigation into some U.S. media outlets to determine if they are operating within the country’s laws.

Russia’s state Duma, or the lower house of parliament, called on its Committee for Information Policy, Information Technologies and Communications to review the activities of several news organizations including Radio Liberty, Voice of America and CNN. The move comes in response to a U.S. initiative to investigate possible Russian media interference in U.S. affairs.

“The U.S. politicians, who had been repeatedly accusing the Russian media of interfering in Washington’s internal affairs, moved from rhetoric to action after the U.S. presidential election,” government officials said.

Konstantin Zatulin, a member of parliament, said the bill was repressive and “can damage the reputation of the Russian TV channel and Russia in general, I believe it necessary to take proactive measures.” 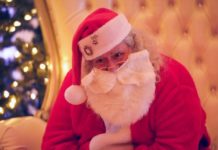 Fauci: Santa got vaccine, ‘good to go’ for Christmas