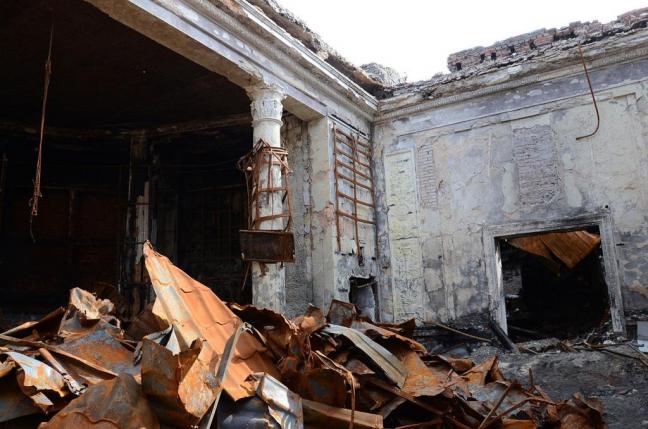 [/one_fourth][three_fourth_last]
Over 60 miles of trenches, four meters (13 feet) wide and two meters (six feet) deep, have been dug in Ukraine’s Rostov region, adjacent to the restive Donetsk and Luhansk regions, to prevent arms and munitions from being carried into Russia. Over 60 smuggling attempts have been stopped, leading to the detention of 130 people and the confiscation of land mines, firearms, artillery shells and grenades, the Moscow newspaper Rossiskaya Gazeta said.

“The separatist regions of Ukraine have become a territory of uncontrolled weapons circulation and arms always flow into the black market in a period of de-escalation,” military analyst Anton Lavrov told Bloomberg News. The weapons could arrive in nearby North Caucasus, a largely Muslim region of Russia where militants have battled federal troops for over 20 years.

Another element at the front lines of the battle between Ukrainian troops and pro-Russian separatists is the presence of mobile crematoriums, Security Service of Ukraine Chairman Valentyn Nalyvaichenko told a television audience in January. Mobile crematories routinely burn eight to 10 bodies of Russian soldiers daily.

“The Russians are trying to hide their casualties by taking mobile crematoriums with them,” said Rep. Mac Thornberry, R-Texas, a U.S. House Armed Services Committee member told Bloomberg News. “They are trying to hide not only from the world but from the Russian people their involvement.”