Jan. 28 (UPI) — Russian opposition leader Alexei Navalny was detained by police in Moscow during a rally to support a boycott of the country’s presidential election.

Navalny, who is being barred from running in the country’s March 18 election due to a criminal conviction he branded as politically motivated, said on Twitter he was arrested after joining the rally.

“I was detained. It does not matter. Come to Tverskaya. You do not go for me, but for yourself and your future,” Navalny tweeted in Russian.

He later tweeted video footage showing police wrestling him to the ground during the rally.

“The detention of one person is meaningless if there are many of us. Someone, come and replace me,” the tweet said.

Thousands of people in Moscow and about 115 other Russian cities took to the streets on Sunday to call for a boycott of the upcoming election.

Earlier on Sunday, Moscow police raided the office of Navalny’s Fund to Fight Corruption organization, which was coordinating the nationwide protests. A video posted to Navalny’s YouTube account shows police using an angular saw to cut through a door during a live broadcast from the office. Police said they were probing a bomb threat.

Reports indicated up to 185 people were detained nationwide while attending the protests. 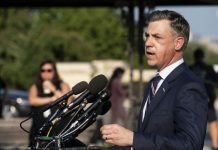