“The [U.N.] is shocked by recent videos that clearly show the beating, castration and killing of a captured serviceman of the Ukrainian Armed Forces by a man believed to be a member of Russia’s Armed Forces or affiliated armed groups,” the U.N. Human Rights Monitoring Mission in Ukraine said in a statement.

“One of the videos shows how a tortured serviceman is shot in the head, and his body is dragged into a ditch. If confirmed, these actions will be classified as war crimes.”

The Monitoring Mission added that the video is “just the latest in a series of videos documenting the torture and extrajudicial executions of prisoners of war and non-combatants by warring parties.”

The video circulated online after first appearing on a pro-Russian channel on Telegram and have been reviewed the Washington Post and The Guardian as well as CNN, though the news reports each noted that they were not able to verify the authenticity of the video.

Aric Toler, head of research and training at the Dutch investigative outlet Bellingcat, suggested on Twitter that the video appeared to be authentic and noted that the Russian soldier seen on the video mutilating the Ukrainian prisoner had been shown in videos from the Azov steel plant in June.

“This horrific assault is yet another apparent example of complete disregard for human life and dignity in Ukraine committed by Russian forces,” said Marie Struthers, Amnesty International’s Director for Eastern Europe and Central Asia.

“All those suspected of criminal responsibility must be investigated and, if there is sufficient admissible evidence, prosecuted in fair trials before ordinary civilian courts and without recourse to death penalty.” 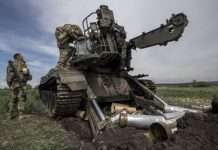