Biden was joined by his wife Jill Biden, Harris, lawmakers, family members and friends in paying tribute to the high court associate justice before her flag-draped casket. Ginsburg died a week ago at the age of 87 after a battle with cancer.

The private event at the National Statuary Hall followed two days of Ginsburg lying in repose at the nearby Supreme Court building. Hundreds lined up to view Ginsburg’s casket there on Wednesday and Thursday.

“It is with profound sorrow and deep sympathy to the Ginsburg family that I have the high honor to welcome Justice Ruth Bader Ginsburg to lie in state in the Capitol of the United States,” she said.

Ginsburg’s casket was placed on the Lincoln Catafalque, a wooden platform built in 1865 to support the casket of President Abraham Lincoln after his assassination.

Female members of Congress stand on the steps of the U.S. Capitol as the flag-draped casket of Justice Ruth Bader Ginsburg is carried by a joint services military honor guard after Ginsburg lied in state at the U.S. Capitol on September 25. Pool Photo by Alex Brandon/UPI | License Photo

Rabbi Lauren Holtzblatt called Ginsburg “our prophet, our North Star, our strength, for so very long.”

“Now she must be permitted to rest after toiling so hard for every single one of us,” she said.

Ginsburg will be buried at Arlington National Cemetery next to her husband, Martin Ginsburg, a tax attorney and Army veteran who died of cancer in 2010. A burial date has not been announced. 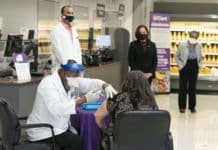 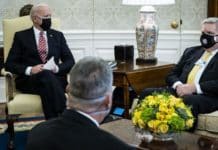