Sept. 22 (UPI) — Supreme Court Associate Justice Ruth Bader Ginsburg will lie in repose at the high court on Wednesday and Thursday before moving to the U.S. Capitol on Friday to lie in state, officials announced Monday.

The Supreme Court said Ginsburg’s casket will arrive in front of the court building just before 9:30 a.m. EDT Wednesday, to be followed by a private ceremony in the Great Hall attended by her family, close friends and members of the court.

Ginsburg will lie in repose under the portico at the top of the front steps of the Supreme Court building to allow for public viewing.

Ginsburg died Friday at the age of 87 after a battle with pancreatic cancer.

When her coffin arrives at the court Wednesday, it will be carried by Supreme Court police officers. Ginsburg’s former clerks will serve as honorary pallbearers and will line the front steps as the casket arrives.

Once inside the Great Hall, it will be placed on the Lincoln Catafalque, a platform constructed in 1865 to support the casket of Abraham Lincoln in the U.S. Capitol Rotunda. A 2016 portrait of Ginsburg by Constance Beaty will be on display.

Friday, Ginsburg will lie in state in the National Statuary Hall at the U.S. Capitol, House Speaker Nancy Pelosi said.

Lying in state is a more formal honor than lying in repose and almost exclusively occurs at the U.S. Capitol.

The ceremony will be open to invited guests only due to the COVID-19 pandemic, she noted.

A private interment service will be held for Ginsburg next week at her burial plot at Arlington National Cemetery. 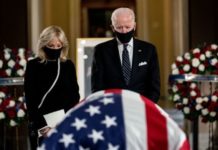 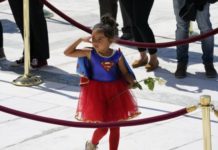