SAN ANTONIO, Nov. 6 (UPI) — A San Antonio police officer, turned in by his own colleagues for allegedly giving a homeless man a sandwich made with feces, has been fired.

“This was a vile and disgusting act that violates our guiding principles of ‘treating all with integrity, compassion, fairness and respect, ” San Antonio Police Chief William McManus said in a statement. “The fact that his fellow officers were so disgusted with his actions that they reported him to internal affairs demonstrates that this type of behavior will never be tolerated.”

Officer Matt Luckhurst, reportedly made a “fecal sandwich,” placed it in a styrofoam container and left it next to a sleeping homeless man in May, while on bike patrol, the Washington Post reported. Then, the chief said, he bragged about it to his fellow officers.

“Firing this officer was the right thing to do,” San Antonio Mayor Ivy Taylor said. “His actions were a betrayal of every value we have in our community, and he is not representative of our great police force.”

Luckhurst was a five-year member of the San Antonio force and was assigned downtown bike duty.

An investigation in to the incident started in May after Luckhurst allegedly bragged to a fellow officer about the sandwich. The officer told him to go back and remove it, but another also reported it to a supervisor.

The police tried to identify and locate the homeless man, to no avail, KSAT reported.

The department’s internal affairs office was notified of the incident in July when the incident was reported to a supervisor. The investigation was taken to civilian and sworn review boards, which recommended Luckhurst be suspended indefinitely.

Ben Sifuentes Jr., Luckhurst’s attorney, said McManus has a history of suspending officers without having all the facts.

“There have been several arbitrations that I’ve had where what he alleges in the suspension turned out to be false. So let’s not assume that what he says is true,” Sifuentes said. Because there were no eye witnesses to the alleged event and no video tape, Sifuentes said he thinks Luckhurst will prevail in arbitration. “We’re going to show this didn’t happen the way the chief alleged.” 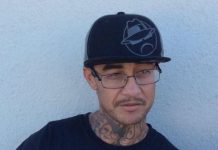