Santa Claus actors, as well as those playing Mrs. Claus and Christmas elves, were to be hired as part of a cancelled celebrity campaign to promote getting vaccinated, an HHS official told the New York Times.

The campaign was envisioned by President Donald Trump’s then-appointee Michael Caputo, a former HHS assistant secretary, who has been on medical leave since September after being diagnosed with cancer and posting conspiracy theories on his Facebook page, including a video accusing the Centers for Disease Control and Prevention of harboring a “resistance unit” seeking to undermine Trump.

The office of HHS Secretary Alex M. Azar said this week that the program had been cancelled. The Santa “collaboration will not be happening,” a spokesperson told the Wall Street Journal.

In late August, as the coronavirus pandemic peaked across parts of the United States, Caputo and the agency approached Ric Erwin, chairman of the Fraternal Order of Real Bearded Santas, to ask if members would participate in TV, radio, social media and podcast ads and live events in 35 cities.

The Santa group agreed to participate and asked to be given the vaccine early, as Santa actors had been vaccinated early in 2009 for H1N1.

The actors who play Santa are in an “at risk” category because of their “advanced age” and “underlying health issues,” Erwin wrote in a newsletter for Santa actors.

“Furthermore, health care officials all concurred that our high rate of interpersonal contact with young children (who are notorious vectors for disease dissemination) further highlighted our need for the vaccine,” he added.

Christmas seasonal workers are watching their livelihoods disappear as stores like Macy’s have cancelled in-person visits with Santa Claus, Mrs. Claus and their elves. Some tech-savvy Santas have offered a Zoom alternative or pre-recorded video messages.

Caputo told Erwin in August that the vaccine was likely to be approved in the late fall and that Santas and other seasonal workers would have it by Thanksgiving, the Wall Street Journal reported.

“If you and your colleagues are not essential workers, I don’t know what is,” Caputo said on a call, which was recorded by Erwin. “I cannot wait to tell the president,” Caputo added. “He’s going to love this.” 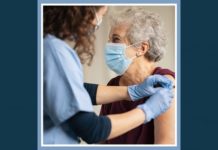