Dec. 17 (UPI) — Scientists knew Saturn was losing its rings, but they weren’t sure how fast. New research suggests the rings are disappearing at the fastest rate estimated by the Voyager 1 and 2 missions — the “worst-case-scenario” rate.

The grains of ice and dust that form Saturn’s rings are constantly pulled into the gas giant’s body by gravity. The paths of falling “ring rains” are influenced by Saturn’s magnetic field.

“We estimate that this ring rain drains an amount of water products that could fill an Olympic-sized swimming pool from Saturn’s rings in half an hour,” James O’Donoghue, scientist at NASA’s Goddard Space Flight Center, said in a news release. “From this alone, the entire ring system will be gone in 300 million years, but add to this the Cassini-spacecraft measured ring-material detected falling into Saturn’s equator, and the rings have less than 100 million years to live. This is relatively short, compared to Saturn’s age of over 4 billion years.”

“If rings are temporary, perhaps we just missed out on seeing giant ring systems of Jupiter, Uranus and Neptune, which have only thin ringlets today,” O’Donoghue said.

At any given moment, the majority of the water ice grains that form Saturn’s rings maintain a stable trajectory. Their orbital path is the product of an equilibrium between two forces, Saturn’s gravity and their orbital velocity. Some grains, however, become excited by ultraviolet light, causing them to react to Saturn’s magnetic field.

The gas giant’s magnetic force pushes the charged particles inward. When the equilibrium is comprised, gravity pulls the particles into its upper atmosphere along the planet’s invisible magnetic field lines.

Ring rains react with Saturn’s ionosphere to increase the longevity of charged particles called trihydrogen cation, H3 ions. Scientists can measure the infrared glow of these ions across bands in Saturn’s atmosphere where ring rains are heaviest.

In future studies, scientists aim to measure the effects of Saturn’s seasons on ring loss rates. 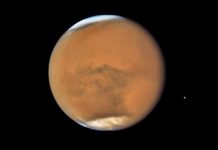 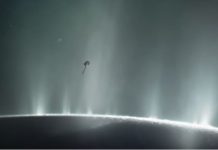 NASA: Saturn’s moon boasts all the ingredients for life 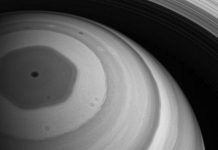