LOS ANGELES, Sept. 25 (UPI) — A 28-year-old Saudi prince was released from jail after being accused of forcing a woman to perform a sex act.

Majed Abdulaziz al-Saud posted a $300,000 bond Thursday on the felony charge of suspicion of forced oral copulation of an adult. He was scheduled to appear in court on Oct. 19.

Police said al-Saud was renting a multimillion dollar home in a ritzy Beverly Hills neighborhood. A neighbor told the Los Angeles Times he saw a screaming, bleeding woman trying to scramble over the eight-foot privacy fence around the compound before the arrest.

Police escorted some 20 people out of the home during the arrest, many of them staff. Police said al-Saud’s status does not grant him diplomatic immunity in this case. 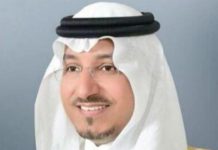