March 17 (UPI) — The contours of Earth’s surface, its topography, influences local weather patterns, and city buildings are part of a place’s topography.

But how exactly does a city’s architecture — its buildings individually and collectively — affect weather? Scientists in Switzerland are trying to find out.

Engineers and meteorologists at the Swiss Federal Institute of Technology in Lausanne, or EPFL, built a streamlined model to predict how the shape and arrangement of buildings, as well as the heat they generate, can alter weather patterns.

“Buildings are often built without taking into account the specific features of a city’s weather patterns or the influence that city buildings can have on the weather,” lead researcher Dasaraden Mauree said in a news release. “Our goal was to develop a program that combines modern weather forecasting models with models that measure the effect of heat released by buildings.”

Scientists have previously developed models to predict the impact of urban structure on weather, but these models considered the dimensions of entire cities, making them cumbersome. The models also relied on large amounts of computing power.

Mauree built a model of Basel, Switzerland, using only a portion of the city’s structures — a section that well-represented the city as a whole, and featuring buildings similar to those found elsewhere in the urban canopy.

“Dividing buildings into bricks is key to understanding the weather processes that take place within a city, because these processes vary with building height,” Mauree explained.

Mauree then populated his model with weather data from Basel. The algorithm was able to accurately predict how changing building sizes and arrangements affected air flow and moisture. He and his colleagues published the model’s findings in the journal Frontiers in Earth Science.

“Our model is designed to better represent building surfaces and more accurately calculate wind and moisture flow within a city. That naturally makes it useful for meteorologists,” Mauree said. “But a blinds manufacturer is also interested in our approach, because it can provide good estimates of wind speed and direction near building facades.” 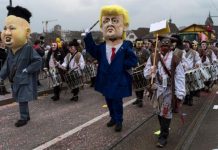