April 24 (UPI) — Scientists say they are one step closer to understanding Europa, a moon orbiting Jupiter that’s widely considered the prime candidate for alien life forms within the solar system.

Europa is believed to contain subterranean salty water hidden by a thick outer shell of ice. But according to a new study examining the moon’s topology, a certain topographical feature called a “double ridge” could indicate the presence of liquid water much closer to the surface than previously thought.

“Our results suggest that shallow liquid water is spatially and temporally ubiquitous across Europa’s ice shell,” stated the study, published this week in the scientific journal “Nature Communications.”

Scientists estimate that the water surrounding Europa is around 90 miles deep. The gravitational pull of other passing moons causes Europa to gently shift and flex, helping it to generate its own heat. The result is a vast, mild, saltwater ocean that’s potentially an ideal incubator for life.

However, the salty liquid is hidden under a crust of ice that researchers estimate is around 18 miles deep. In order to investigate the ocean’s depths, any spacecraft that landed on Europa would need to drill down — or so they thought.

Double ridges could indicate the presence of liquid water barely a mile below the surface. An abundant geographical feature that appears as a pair of gashes in the moon’s surface, each parallel peak is hundreds of miles long, up to 1,000 feet high and separated by a valley around half a mile wide.

On a recent pass, a NASA satellite captured images of a smaller version of a double ridge identical to the ones that crisscross the surface of Europa. Researchers found that the Greenland double ridge formed when liquid water rose up from beneath and refroze. The ice expanded, forcing the ridges upward.

“Using surface elevation and radar sounding data, we show that this double ridge was formed by successive refreezing, pressurization, and fracture of a shallow water sill within the ice sheet,” states the study, which was conducted by three researchers at Stanford University.

If Europa’s double ridges formed the same way, it would indicate that liquid water exists on the moon less than a mile below the surface, the authors suggested.

“If this mechanism controls double ridge formation at Europa, the ubiquity of double ridges on the surface implies that liquid water is and has been a pervasive feature within the brittle lid of the ice shell, suggesting that shallow water processes may be even more dominant in shaping Europa’s dynamics, surface morphology, and habitability than previously thought,” they wrote.

In 2024, NASA plans to launch the Europa Clipper, a spacecraft that will use sophisticated radar to investigate the icy surface of Europa. The agency has also proposed a Europa lander that would drill into the ice, though no launch date has been set. 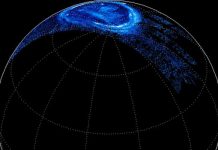 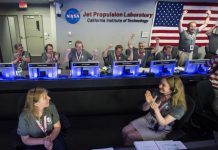 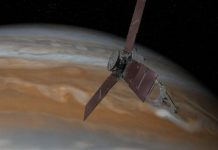