She also called for the passage of the Green New Deal, the resolution pushed by New York Rep. Alexandria Ocasio-Cortez that calls for a transition to all renewable energy by 2030, saying it was “this generation’s moonshot” and promising to tax the use of carbon.

“We can’t afford not to achieve this,” said Gillibrand. “And we don’t have more time to waste.”

Gillibrand vowed not to accept corporate PAC money, federal lobbyists’ money and an individual super PAC and said she would advocate for publicly funded elections.

“Find me any unsolvable problem, and I’ll point to the greed and corruption standing in the way,” she said.

Gillibrand called back to a theme of her campaign announcement, hailing the bravery of sexual assault survivors, the LGBTQ community and recipients of Deferred Action for Childhood Arrivals, known as Dreamers, as she was joined on the stage by activists for the various causes.

“The people of this country deserve a president who is worthy of your bravery, a president who not only sets an example, but follows yours,” she said. “Your bravery inspires me every day, and that is why I’m running for president of the United States.”

Actress Connie Britton, a college friend of Gillibrand’s, declared that the presidential hopeful “cannot be knocked down,” as she introduced her on Sunday.

“Not in front of Trump plaza or anywhere else,” Britton said. “This bravery comes from her unwavering core of integrity.”

“The Mueller report must be made public. All of it. Nobody in this country, not even the president, is above the law or immune from accountability,” she said.

Gillibrand also called the president a “coward” who “puts his name in bold on every building,” referring to the Trump building in the backdrop, as a “shrine to greed, division and vanity.”

“He does all of this because he wants you to believe he is strong. He is not,” she said.

She added, however, that she is “not running for president because of who I’m fighting against” but rather “who I’m running for.”

“We deserve a president who is brave, a president who inspires us to stand for something greater than ourselves,” Gillibrand said. “We don’t build walls, we build bridges because our unity of purpose lifts us higher than any tower.” 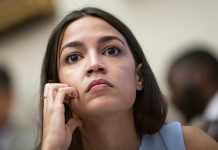 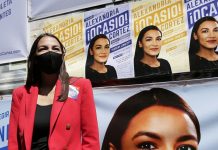 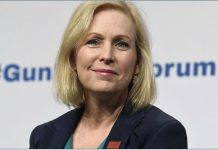