Merkley’s marathon session didn’t delay the confirmation process and wasn’t part of a filibuster against the appellate court judge.

But Republicans said they intend to invoke the so-called “nuclear option” and confirm Gorsuch on a simple majority vote.

In 2013, Democrats changed the Senate’s rules to allow confirmation of other presidential nominees, including Cabinet appointees, by a simple majority.

Senate Majority Leader Mitch McConnell said last week he wants the Senate to vote by Friday before its two-week recess.

“Judge Gorsuch is going to be confirmed,” Senate Majority Leader Mitch McConnell said in an interview with Chris Wallace on “Fox News Sunday.” “The way in which that occurs is in the hands of the Democratic minority.”

“Both sides I know are pointing fingers at the other in this debate — saying that the other side started it. We did not even get our nominee, when Sen. McConnell broke 230 years of Senate precedent, didn’t even allow Judge [Merrick] Garland a hearing or a vote,” Schumer said Tuesday.

During Merkley’s marathon speaking session, which was televised on C-SPAN, he noted Republicans’ opposition last year didn’t conduct a hearing for President Barack Obama‘s pick, Garland, to fill the Supreme Court seat after the death of Antonin Scalia on Feb. 14, 2016.

“The majority team in this chamber decided to steal a Supreme Court seat,” Merkley said. “Such a theft never, ever has happened in the history of our nation.”

He also said Gorsuch should not be considered until the investigation into alleged ties between Trump and Russia ends.

Merkley spoke next to a board featuring the words “We the People” from the Constitution.

Strom Thurmond holds the records for speaking the longest. The South Carolina senator talked for more than 24 hours in protest of civil rights legislation in 1957. 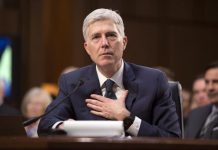 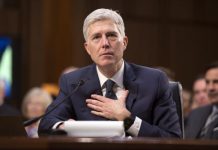