“This framework is a first step in allowing us to find novel, creative approaches that fix the problems with the current system and provide long-term certainty for businesses and stability for federal revenues so that we remain globally competitive,” Warner said in a statement.

The senators’ plan would seek to overhaul three taxes introduced by Republicans in their 2017 tax bill.

Like Biden’s plan, the senators seek to repeal the tax exemption provided by the Global Intangible Low-Taxed Income established in the 2017 legislation.

Both proposals call for calculating the minimum tax on a country-by-country basis rather than a global standard as the senators proposed a “high-tax exclusion” that would group income from low-tax countries together and exclude income from countries already taxed at a higher rate.

While Biden’s plan would seek to repeal the Foreign-Derived Intangible Income exception for corporations income related to exports and use the revenue to fund research and development incentives, the senators instead proposed altering the benefits so they do not decrease when companies add tangible assets.

Biden also called for the repeal of the Base Erosion and Anti-Abuse Tax, while the senators proposed creating a new tax bracket to prevent the tax from denying companies domestic tax credits they would otherwise be able to claim.

Treasury Secretary Janet Yellen also said the Biden administration is working with G20 nations to agree to a global minimum corporate tax rate “that can stop the race to the bottom,” during comments in front of the Chicago Council of Global Affairs on Monday. 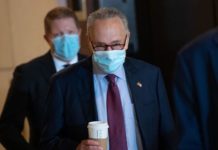 Senate Democrats propose $350B in aid for communities of color