June 12 (UPI) — The Senate Foreign Relations Committee sent an emissary to Nicaragua to accompany the ongoing talks between the Nicaraguan government and other groups to end political violence in the country, the U.S. State Department announced on Monday.

McCarry and Ambassador Laura F. Dogu met with the non-government groups that are involved in a National Dialogue with the Nicaraguan government, including the Catholic Episcopal Conference and the Civic Alliance “to end the violence and advance negotiations.”

“The United States respects Nicaragua’s sovereignty and understands that the ultimate solution to the current conflict must come from Nicaraguans,” the U.S. State Department said in a statement. “It is the desire of the United States to respectfully support the CEN-led National Dialogue in a way that is helpful and acceptable to all parties in order to find a peaceful solution to the democratic crisis in Nicaragua.”

The U.S. government appears to be getting increasingly involved in the situation in Nicaragua, where protests broke out across the country in April against social security cuts and transformed into a massive movement against state violence after National Police officers began firing on protesters, killing more than 70 people in a span of two weeks. Since then, more than 110 people have been killed in the violence, including a U.S. citizen.

The decision to send an emissary to engage in Nicaragua’s National Dialogue talks comes less than a week after the U.S. State Department issued visa restrictions on several unnamed Nicaragua government officials.

On June 5, Sens. Marco Rubio, R-Fla., and Ted Cruz, R-Texas, joined with several other lawmakers to urge President Donald Trump to invoke the Global Magnitsky Act. Doing so would allow the U.S. government to put sanctions on Nicaraguan individuals allegedly responsible “for human rights abuses and acts of corruption.”

And last week, Rubio and Cruz — both of whom represent states with large Nicaraguan populations — met with prominent Nicaraguan student protesters and the widow of a Nicaraguan journalist who was killed during protests last month. 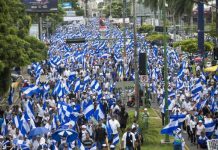 At least one dead as Nicaraguan protesters hole up in church 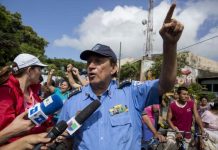 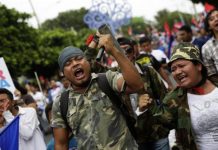 U.S. Ambassador to Nicaragua reports gunfire near her house