June 5 (UPI) — A pair of Democratic senators said they were denied tours of migrant processing facilities for unaccompanied minors.

Sen. Jeff Merkley of Oregon shared a Facebook live stream as he and a camera crew attempted to tour a facility in Brownsville, Texas, on Sunday and was turned away after having been told in advance he wouldn’t be admitted to the facility.

“I was barred entry. Asked repeatedly to speak to a supervisor — he finally came out and said he can’t tell us anything. Police were called on us,” Merkley wrote on Twitter Sunday night. “Children should never be ripped from their families and held in secretive detention centers.”

Merkley said he was told the facility — owned by private nonprofit Southwest Key Programs, run by the Office of Refugee Resettlement and operated out of a former Walmart — was possibly housing hundreds of refugee children separated from their parents.

On Monday, Sen. Robert Menendez of New Jersey wrote on Twitter that his team also was barred from touring a migrant processing facility where families are being separated, and he demanded answers from Homeland Security Secretary Kirstjen Nielsen.

“When the elected representatives of the people can’t observe how our government is operating, we’re in an upside down world,” Menendez wrote.

The senators’ visits came after migrants rights activists submitted a complaint to the Inter-American Commission on Human Rights — a body of the Organization of American States — on Thursday, asking it to intervene against the United States’ push to separate children from parents after crossing the border.

In early May, Attorney General Jeff Sessions promised that 100 percent of immigrants who entered the United States unlawfully — including some seeking asylum — will be prosecuted and departed from their children.

The American Civil Liberties Union issued a report in late May stating that immigrant children are subject to “sadistic” abuse while held in federal custody.

According to the report based on internal investigations conducted by the Department of Homeland Security in 2014, 25 percent of children between the ages of 5 and 17 in U.S. Customs and Border Protection custody had reported physical abuse, including sexual assault and beatings by Border Patrol agents. 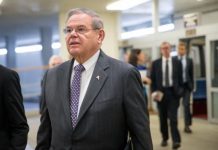