They joined the majority of the state’s members in the U.S. House of Representatives in the growing tide of lawmakers — Democrats and Republicans — urging the defiant governor to step down.

“Due to the multiple, credible sexual harassment and misconduct allegations, it is clear that Governor Cuomo has lost the confidence of his governing partners and the people of New York,” the senators said. “Governor Cuomo should resign.”

Cuomo repeated his denial of the allegations Friday and said, again, he would not resign.

“Gov. Cuomo is guaranteed due process under law,” he said in a statement. “But there is a difference between formal investigations that may end in criminal charges and a question of confidence in our political leadership.”

Cuomo is under fire for the misconduct accusations and a scandal on his failure to report nursing home deaths connected with COVID-19.

“These allegations have all been consistent and highly-detailed, and there are also credible media reports substantiating their accounts,” Reps. Alexandria Ocasio-Cortez and Jamaal Bowman said in a joint statement.

“There is also the extensive report from the attorney general that found the Cuomo administration hid data on COVID-19 nursing home deaths from both the public and state legislature.”

Ocasio-Cortez and Bowman said they have joined 55 members of the New York state Legislature who believe that Cuomo “can no longer effectively lead in the face of so many challenges.”

Cuomo so far has resisted all calls to resign and the New York State Assembly opened an impeachment investigation on Thursday. Cuomo apologized for the harassment last week.

“I now understand that I acted in a way that made people feel uncomfortable,” Cuomo said. “It was unintentional and I truly and deeply apologize for it. I feel awful about it and, frankly, I am embarrassed by it.”

“I’m not going to resign,” he added. “I work for the people of the state of New York.” 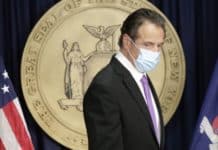