BELGRADE, Serbia, Jan. 15 (UPI) — Serbia told Kosovo on Sunday it will defend “every inch of its territory” after a perceived provocation by ethnic Albanians involving a train traveling between both nations.

Serbian President Tomislav Nikolić issued the warning after a Serbian train with signs reading “Kosovo is Serbian” and colors of the Serbian flag stopped Saturday before entering Kosovo because of reports ethnic Albanians planned to blow up the tracks.

Kosovo had plans to prevent the train from crossing the border “to protect the country’s sovereignty,” Kosovo Prime Minister Isa Mustafa said.

The promotional ride would have been the first from the Serbian capital to Mitrovica in Kosovo since 2008 when Kosovo declared independence from Serbia. The split is not recognized by Serbia and its ally Russia, but the United States and the European Union recognize Kosovo.

“Yesterday, we were on the verge of clashes,” Nikolić said after he met with Serbia’s top security body. “We are a country which has to protect its people and its territory.”

Serbian Prime Minister Aleksandar Vucic alleged that Kosovan forces were planning to blow up the tracks although Kosovo police said no explosives were found.

“It was my decision to stop the train in Raska to preserve the freedom and lives of our people, to prevent a wider conflict and show that we want peace,” Vucic said. “We sent a train, not a tank.”

Mustafa told reporters police forces along the border were deployed to prevent the train from crossing the border because the nation won’t accept “machines that will provoke with a message of occupation.”

Serbia noted the slogan “Kosovo is Serbian” in many languages was a celebration of its cultural heritage. Serbian Orthodox religious symbols adorned the inside. 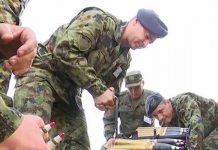 Serbia, Russia to wrap up joint military exercise this week 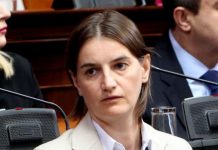 Serbia gets first openly gay woman to be prime minister