SEOUL, May 29 (UPI) — Seven South Korean tourists died and 19 are missing after a sightseeing boat carrying them sank in the Hungarian capital of Budapest on Wednesday night local time.

The boat was carrying 33 South Korean passengers and two Hungarian crew members and collided with another ship on the Danube River near the country’s Parliament building, according to Hungarian news agency MTI.

Seven people have been rescued and a massive search operation is underway for the missing passengers.

The boat, called Hableany, or “Mermaid” in Hungarian, was on an ordinary city sightseeing tour when the accident happened at around 10:00 p.m. local time.

South Korean President Moon Jae-in on Thursday instructed the government to use “all resources available” to cooperate with the Hungarian government on rescue activities, presidential spokeswoman Ko Min-jung said.

The president also ordered the formation of a response team under the leadership of Foreign Minister Kang Kyung-hwa, the spokeswoman said. South Korea plans to dispatch a team of officials to Hungary. 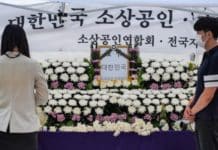