Jan. 28 (UPI) — Japanese Prime Minister Shinzo Abe said his goal is to normalize relations with North Korea during his annual speech at the opening of parliament on Monday.

“I will act with determination and not miss the opportunity to break the shell of mutual distrust to resolve the North Korean nuclear and missile, as well as the all-important issue of the abduction [of Japanese citizens], by meeting directly with Kim Jong Un,” Abe told parliamentarians.

The Japanese leader added he will “settle the unfortunate past” with the North and that his government will “closely cooperate with the international community, including the United States and South Korea,” to normalize diplomatic relations with Pyongyang.

Abe’s administration has taken a hard-line approach to North Korea despite the move toward engagement in the South and by the Trump administration.

Last year, the prime minister had described North Korea’s nuclear and missile development as a “serious and imminent threat.”

On Monday, Abe indicated a change in the direction of North Korea policy, a sign that he may be seeking to make amends and not lag behind neighboring countries in diplomacy.

Kim has met with South Korea’s Moon Jae-in three times, and Chinese President Xi Jinping four times. He is also planning to meet President Donald Trump for the second time before the end of February.

Abe addressed other issues and pledged to resolve a dispute with Russia over the Kuril Islands, but did not address recent clashes with South Korea over history, or a radar incident involving Japanese aircraft and South Korean ships, according to South Korean news service News 1.

The prime minister did pledge to prevent incidents related to government data.

Investigations in Japan have revealed the government manipulated labor statistics for seven years. 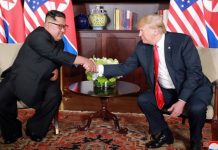