“Snooty’s death was the result of a tragic accident and the circumstances are being investigated,” the South Florida Museum said in a statement.

Snooty’s body was found in an underwater area used to access the exhibit’s plumbing system. The area is only used by staff, but a door into the area was jarred open, allowing Snooty to get inside. The museum staff said it appears that Snooty was not able to turn around once he was in the area.

“Our initial investigation indicates that Snooty’s death was a heartbreaking accident and we’re all quite devastated about his passing,” said Brynne Anne Besio, the Museum’s CEO. “We’re reviewing what happened and will be conducting a full investigation into the circumstances. Snooty was such a unique animal and he had so much personality that people couldn’t help but be drawn to him. As you can imagine, I — and our staff, volunteers and board members — considered him a star. We all deeply mourn his passing. We are honored to have had him with us for so long and will continue his legacy through our manatee rehabilitation program.”

Snooty was born on July 21, 1948, at the Miami Aquarium and Tackle Company. His birth became the first recorded birth of a manatee in human captivity.

Most wild manatees die by the age of 10, but Snooty’s long life showed the potential longetivity of manatees when not exposed to human dangers such as boat strikes and fishing debris.

“Taken proper care of, paying attention to their habitats, those things can help with their longevity. They are hearty animals overall,” Marilyn Margold, director of living collections at South Florida Museum, told Guinness World Records in 2016. 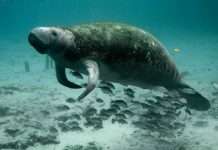 Four manatees flown from SeaWorld to Ohio zoo for treatment