CARMEL, Calif., Aug. 7 (UPI) — The Soberanes fire near Big Sur in Northern California has grown to more than 57,500 acres Sunday as all but one evacuation order was lifted, fire authorities said.

The fire gained another 1,500 acres over the weekend, with about 5,100 firefighters with at least 300 fire engine,s along with air tankers and bulldozers, continuing to battle the blaze that is currently 45 percent contained, Cal Fire said.

The fire has destroyed 57 homes and killed a bulldozer operator helping to battle the wildfire.

Meanwhile several other fires burn in California, with the Cold Fire so far burning more than 5,385 acres of Lake Berryessa in Northern California. No homes have been damaged or people injured, and the fire is currently 50 percent contained, said Cal Fire spokeswoman Christina Barker.

The Goose Fire near Fresno, has burned 2,241 acres and destroyed nine buildings but is 94 percent contained. No injuries have been reported.

The Sand Fire in Santa Clarita near Los Angeles is now being cleaned up by firefighters who are patrolling for hot spots. That fire burned more than 41,000 acres and killed one person. 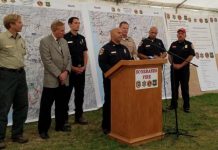