Oct. 9 (UPI) — The United States commemorated Columbus Day on Monday, but the 80-year-old holiday is losing its luster among some communities.

The day was established in 1937 to honor Italian discoverer Christopher Columbus and his arrival in the Western Hemisphere in 1492. While the day has long been observed nationally, it is losing its standing in some U.S. communities.

Native American leaders in the United States — who say the Western world was already populated with native tribes by the time of Columbus’ arrival — have been leading a movement to supplant Columbus Day with Indigenous Peoples Day, or at least make the day a shared holiday. Over 50 municipalities and four states — Minnesota, Vermont, Alaska and South Dakota — use the day to honor indigenous people.

Most of the efforts to honor Native American heritage on the second Monday in October have come since 2014, but the movement is accelerating.

Los Angeles, after an August resolution, now refers to the holiday as Indigenous Peoples Day and encourages greater study of Native American culture in schools. The city council of Austin, Texas, voted last week to take a similar path — and organizers in Pittsburgh said next year’s parade there may incorporate more of a “Heritage Day” theme.

The movement can generally be traced back to 1991, when Indigenous Peoples Day was first codified into law in Berkeley, Calif., as a counterpoint to the 500th anniversary of Columbus’ landing. While the interest in celebrating indigenous people has grown, some argue that it’s come at the expense of the Italian-American community.

“On behalf of the Italian community, we want to celebrate with you,” Ann Potenza, president of Federated Italo-Americans of Southern California, said in August at a Los Angeles hearing. “We just don’t want it to be at the expense of Columbus Day.”

This year’s holiday comes amid renewed controversies over government statues honoring Confederate Civil War leaders. Dissatisfaction over the issue has led to some statues of Columbus to be defaced. One sculpture in New York City was splashed with red paint and the phrase, “hate will not be tolerated.”

A 350-foot tall statue of one of Columbus’ ships in Puerto Rico, though, survived Hurricane Maria two weeks ago — while most of the city sustained heavy damage. 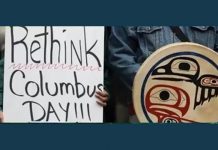 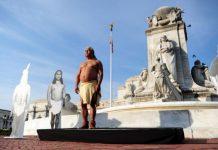