Two Forest Acres Police Department officers, 32-year-old Greg Alia and a training officer, responded to a report of a suspicious individual spotted near the mall around 8 a.m.

Upon arrival, Alia and his fellow officer observed the suspect inside a tan van and attempted to speak to him. The criminal then fled into a Barnes & Noble bookstore located inside the mall, police said. KWWL reported a struggle ensued between the suspect and Alia, during which shots were fired and Alia was killed.

The suspect — 34-year-old Jarvis Hall — was also allegedly armed with a knife. Hall was taken into custody as State Law Enforcement Division officials and Columbia police were called in to assist with the crime scene.

Alia was married with a newborn child and grew up in the Forest Acres area.

Flags outside the Forest Acres Police Department headquarters were flown at half-staff in observance of Alia’s death. 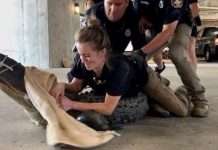 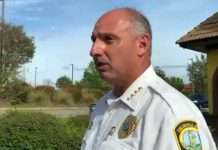