The two militaries agreed to the handover on Friday during a virtual meeting, but were unable to solve an impasse over costs of any cleanup on bases like Yongsan Garrison in central Seoul, Yonhap and Hankook Ilbo reported.

Discussions ended after the two sides agreed to continue cost sharing negotiations. A South Korean government official who spoke to reporters Friday said 24 out-of-use bases returned in the past cost Seoul about $202 million in decontamination costs.

South Korea’s environmental ministry has previously said hazardous substances, including benzene, arsenic, and lead, were found in the soil and water on bases.

Officials in Seoul also said inspectors found oil pollution and heavy metal contamination on 11 out of the 12 bases that were returned Friday, according to Hankook Ilbo.

South Korean advocacy groups say the cleanup of the 12 bases would cost about $275 million. Government sources said the U.S. military would look into cost sharing only after South Korea covers the initial costs, the report says.

Seoul could be eager to move ahead with the cleanup, particularly at Yongsan, where plans have been formulated to build new homes, most likely high-rises to make up for the shortage of apartments in the capital.

Government sources who spoke to Yonhap on Friday said the pollution issue must be settled first to guarantee the housing supply.

The administration of President Moon Jae-in has come under criticism for real estate policies that have failed to control skyrocketing housing prices. Demand is highest in Seoul, where most families settle for work and education.

Shin Soo-yeon, an activist for Green Korea United, said Friday that Seoul is downplaying environmental concerns after the return of the bases.

Other activists said the U.S.-South Korea Status of Forces Agreement is unfair, and Seoul should have strengthened environmental requirements before the return of bases, according to Hankook Ilbo. 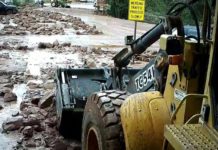