May 18 (UPI) — A South Korean court has suspended taking “disciplinary action” against a group of local graduate students who were targeted for wearing gay pride-themed attire during a church service in May 2018.

Seoul Eastern District Court said Friday five students of the Presbyterian University and Theological Seminary will be allowed to apply for an injunction against disciplinary action, Yonhap and Newsis reported.

All disciplinary action is to be suspended until a final court decision is reached in a case that is highlighting strongly discriminatory attitudes toward the lesbian, gay, bisexual, and transgender community in South Korean churches.

In its decision on Friday, Seoul Eastern District Court said it was “difficult” to see how gay pride attire interferes with religious worship, and difficult to judge the act as illegal, according to Newsis.

Lawyers for a Democratic Society, or Minbyun, a progressive advocacy group, has supported the students in the case. The group said Friday the call for disciplinary action in response to the clothes the students wore has no legal basis, adding it is difficult to say the students’ decision to wear the attire was an illegal act that obstructs church services.

Minbyun also said Friday is International Day Against Homophobia, Transphobia and Biphobia. The group petitioned the court to decide with sexual minority students in mind. The organization added students’ statements or opinions were not accounted for when their school decided to pursue disciplinary action.

LGBT people continue to face tough legal challenges and discrimination in Asia’s fourth-largest economy. Gay marriage and other forms of legal partnership are not available. Single-sex relations are categorized as “sexual harassment” in the military and punishable by a maximum of one year in prison.

A total of eight students displayed gay pride at the church service last year, but only some of the students were targeted for disciplinary action after they uploaded photos of themselves and a gay pride flag. 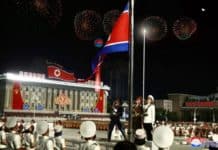