April 17, 2020 (UPI) — A repeat of the ferociousness of the tornado outbreak during the Easter weekend of 2020 is not anticipated, but a new round of severe weather, including the potential for tornadoes, seems likely to target many of the same areas hit hard recently in the southern United States.

Many communities in the South are cleaning up and beginning to pick up the pieces following a major outbreak of violent weather that struck Saturday to Monday and triggered approximately 960 incidents of severe weather, including more than 140 tornado reports. Severe weather incidents were reported in every state in the South. The storms claimed the lives of at least 34 people across six states. The pandemic and social distancing measures have been complicating an already difficult time in the aftermath of the devastating storms.

“We saw more tragedy in the midst of what is already one of the most trying times our state has endured,” South Carolina Gov. Henry McMaster said over social media, referencing dealing with the severe weather amid the COVID-19 pandemic.

“This environment has come with some unique complications, but the Red Cross is practicing social distancing just like the rest of the nation,” Stephanie Wagner, spokesperson for the American Red Cross told AccuWeather’s Brittany Boyle in a TV interview.

“Our goal is to support people in their time of need after a disaster, to provide comfort, care and hope. And in this time with this COVID-19 environment, we’re adjusting some of our service delivery to be done so in a virtual capacity, providing things like financial assistance, mental health,” Wagner said, adding that the Red Cross has not opened shelters for victims and instead has focused on getting people shelter through hotels, dormitories, etc.

A storm system forecast to bring a modest amount of rain and mountain snow to California late this week will make the difficult trek across the southern Rockies and is likely to reorganize upon nearing the lower Mississippi Valley this weekend.

The storm will then begin to tap moisture from the Gulf of Mexico and pump warm and humid air over the South Central and Southeast states.

“All forms of severe weather are anticipated with the event that is forecast to span Sunday and Monday in the South,” AccuWeather senior meteorologist Rob Miller said.

“The strongest storms will have the potential to bring wind gusts to 60 mph, flash flooding, large hail and perhaps even a tornado during the upcoming severe weather outbreak,” Miller said.

Adding to the danger will be the risk that some of the tornadoes could be wrapped in rain or may occur after dark.

AccuWeather meteorologists do not believe the number of tornadoes with the upcoming event will come close to the dozens of tornadoes that were spawned with the major outbreak during the 2020 Easter weekend. However, all it takes is for one tornado to strike a community to cause widespread destruction and potentially cause loss of life. And the event from Sunday to Monday is still likely to produce multiple tornadoes.

The overall strength of this storm system will pale in comparison to the powerful storm that traveled from the Deep South to the Great Lakes and southeastern Canada last weekend, so a broad area of high winds outside of thunderstorms is not expected to affect northern locations.

The severe weather event is also likely to be somewhat more compact in nature, when compared to the Easter weekend outbreak. Severe weather is not expected to reach into the middle Mississippi and Ohio valleys or the mid-Atlantic region. The severe weather risk from Sunday to Monday is forecast to extend from northeastern Texas to northern Florida, Georgia, South Carolina and southern North Carolina.

Even though the upcoming event may not have the coverage or perhaps the intensity of the Easter weekend outbreak, people are encouraged to take all severe weather events seriously and have a plan of action in place prior to the arrival of a severe thunderstorm. Doing so could save valuable seconds and ultimately prove to be life-saving.

Many major cities are in the potential path of severe weather with the upcoming event. These cities include Port Arthur, Texas; Atlanta and Augusta, Ga.; Jackson, Miss.; New Orleans and Baton Rouge, La.; Birmingham and Montgomery, Ala.; Columbia and Charleston, S.C.; Wilmington, N.C.; and Tallahassee and Jacksonville, Fla.

The path of the center of the storm system is forecast to be roughly along Interstate 20 with a slight turn toward the northeast near the Atlantic coast.

Near and just north of I-20, a swath of drenching rain is forecast with a general 1 inch to 2 inches likely in about 24 hours.

An AccuWeather Local StormMax of 4 inches is anticipated during the same period, which can be enough to cause not only urban flooding but also a rapid rise on small streams.

Forecasters urge motorists not to attempt driving through flooded roads. Road surfaces can wash away underneath floodwaters, and the force of flowing water could carry vehicles downstream where they could become submerged.

The period from April to May is prime time for tornadoes over the lower Mississippi Valley and the Southeast.

These two months are when the atmosphere can quickly warm and turn moist as strong storm systems from the western U.S. still travel far enough south to cause strong wind shear.

Additional rounds of severe weather are anticipated for the South in the coming weeks.

“In terms of severe weather and tornado risk, the overall weather pattern is loaded for the rest of April and into May,” Paul Pastelok, AccuWeather’s top long-range forecaster, said.

The weather pattern also looks conducive for significant rounds of severe weather over the Central states well into May, according to meteorologists. 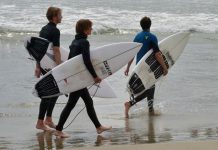 ‘Dome of Heat’ to threaten many record highs across western U.S. next week 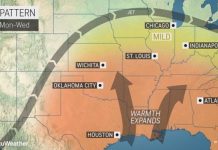