April 7 (UPI) — The S&P 500 scraped its way to a record close on Wednesday in a mixed day of trading as the Federal Reserve indicated it would remain committed to policies supporting economic recovery.

Markets reacted to minutes from the Fed’s March policy meeting where officials indicated the pace of asset purchases is likely to remain the same as the central bank works toward its economic goals.

“Participants noted that it would likely be some time until substantial further progress toward the Committee’s maximum-employment and price-stability goals would be realized and that, consistent with the Committee’s outcome-based guidance, asset purchases would continue at least at the current pace until then,” the minutes said.

Eric Schiffer, CEO of the Patriarch Organization told MarketWatch he believes the market still likely “has room to run.”

“April is a good month for markets historically and as the earnings season unfolds, I think you’ll see a greater level of increases across the board in terms of future earnings projections,” said Schiffer.

Officials also said they expect a substantial economic rebound in 2021 and better-than-average growth in the following years.

Lindsey Bell, chief investment strategist at Ally Invest told CNBC there are “lots of reasons to be excited about the months ahead” and the remainder of the year.

“Stocks’ momentum is strong, no doubt about that. But the market may be ready to take a breather as investors digest all the good news, determine how much of that is priced in and weigh it against uncertain risks like inflation.” 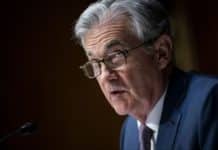