Trump on Tuesday tweeted that Republicans should approve the increased payments unless they “have a death wish,” but also called for the Senate to approve a repeal of Section 230, which provides federal protections for technology companies like Facebook and Twitter, and to take action on his repeated claims of voter fraud in the 2020 presidential election.

While markets fell Tuesday, all three major indexes remain up for the year as tech stocks have propelled the Nasdaq up 42.7% amid the pandemic, while the S&P has gained 15% and the Dow has climbed 5.9%.

“After a tumultuous year, stocks look almost certain to end 2020 on a high as there is no sign that the global flood of fiscal and monetary stimulus is about to be scaled back,” Raffi Boyadjian, senior investment analyst at XM, said according to MarketWatch.

“And with vaccine rollouts gathering pace, it is easy for investors to look past the daily grim headlines of record COVID infections and deaths.” 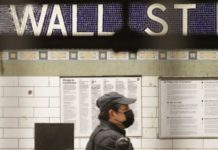