June 8 (UPI) — A SpaceX Falcon Heavy rocket is scheduled to launch June 24 from Florida with 24 satellites aboard — the first time the U.S. government has used the big rocket for such a mission.

“The choice to use this rocket was actually part of the bigger strategy to get away from a sole source environment and into a competitive environment,” said Col. Robert P. Bongiovi, director of the Air Force’s Launch Systems Enterprise.

Labeled the Space Test Program-2, the upcoming launch will be the third for a Falcon Heavy rocket, the largest rocket in use today, deploying satellites at four different orbital altitudes. SpaceX says it is among the “most challenging” launches it has ever tackled.

The launch had been planned for 11:30 p.m. on June 22, but Air Force officials said Friday it would be June 24 at the earliest. Liftoff is to be from Launch Complex 39A at Kennedy Space Center.

The rocket’s second stage will have four separate burns over six hours to get all satellites into the correct orbits. The maneuvers are why the launch required such a large rocket — not the weight or the size of the satellites, according to the Air Force.

Among the satellites on board will be a government experiment to test a less toxic, more efficient spacecraft fuel that could replace highly toxic hydrazine. It is called the Green Propellant Infusion Mission.

The Air Force says the new fuel uses hydroxyl ammonium nitrate. It will be tested on a platform provided by Ball Aerospace.

“This could give future satellites longer mission durations, more maneuverability, increased payload space and easier launch processing,” according to Ball.

The launch will reuse side boosters that flew back to Cape Canaveral after the Arabsat-6A Falcon Heavy launch in April.

Other satellites are for NASA, the National Oceanic and Atmospheric Administration, various Defense Department research laboratories, and university research projects.

The missions include an advanced atomic clock for navigation improvements; weather research; instruments to detect how weather and radiation in space impact spacecraft electronics; and CubeSat missions, including two that will work with the weather satellites to measure radio signal distortions when passing through the upper atmosphere. 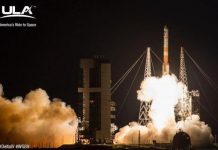