June 30 (UPI) — A Spanish non-governmental rescue boat that rescued 60 refugees off the coast of Libya is heading to Barcelona after Italy’s interior minister said they were not welcome.

Government officials in Rome suggested instead the boat head to neighboring Malta, whose government hit back, saying the closest port was Lampedusa, which falls under Italy’s responsibility.

The NGO rescue vessel had asked to head to Spain after being refused to dock in Italy and Malta, the closer landing locations.

“Despite the hurdles, we continue to protect the right to life of invisible people. Their stories on what they experienced [in] Libya are terrifying,” Proactiva Open Arms said.

Barcelona Mayor Ada Colau announced on Twitter the offer to open the port.

“Thank you for doing the hardest and most important, saving lives, and thank you for not giving in to cruel and inhuman European policies. Barcelona awaits you with open #welcomeOpenArms,” Colau said to the rescue crew.

The rescue comes one day after Libya’s coast guard rescued more than a dozen survivors from a capsized migrant boat, which officials fear left at least 100 people, including three babies, dead.

On Friday, European Union leaders struck an immigration deal that could ease the burden of resettling refugees caught up in Europe’s migrant crisis.

EU leaders agreed controlled migrant processing centers would be set up on a voluntary basis to help distinguish between legitimate asylum seekers and undeserving migrants, who will be turned back.

The deal would give more support to Italy and other Mediterranean countries and intensify efforts to stop smugglers operating out of Libya. It also includes a statement about a need for boats to pick up migrants in the Mediterranean, which would provide relief to Italy.

The agreement came after a dispute among EU countries left two migrant ships stranded in the Mediterranean Sea for several days. Italy and Malta initially refused to allow the ships to dock in the two countries, though Malta eventually relented. 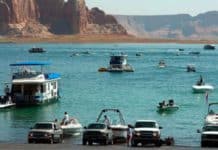