April 4 (UPI) — Anti-Nazi vandals scraped a swastika off of an old church bell in a small town in Germany.

The bell has hung in a church in Schweringen, in northwest Germany, since 1934. And sometime over Easter, the swastika was scraped off.

In a letter published in local newspaper Die Harke, the vandals explained their motive.

“We did spring cleaning,” the note said in German, according to a translation by the BBC. “Not only the village cleaned, but also the bell. Of pigeon dung, of the filth of the National Socialists, who still threatened after 80 years to divide the village population, and hopefully also of the dirt that might have been thrown off about Schweringen.”

Although the swastika has been on the bell for decades, it apparently didn’t set off any controversy until last September, when some people voiced opposition to having it in the town’s church. The parish council then voted to remove the bell.

According to EuroNews, the superintendent for the Evangelical Church in Lower Saxony, Dr. Petra Bahr, said members of the congregation will decide any legal action should be taken.

The incident comes about a month after the city council of Herxheim, a village in southeastern Germany, voted to keep a church bell prominently emblazoned with a Nazi symbol and the words, “Everything for the Fatherland — Adolf Hitler.”

Herxheim’s mayor, Georg Welker, said if the bell were removed, it “would hang in some museum where someone could stand in front of the bell at any time and take a selfie.” 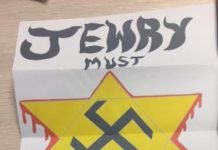 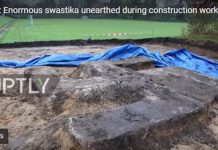