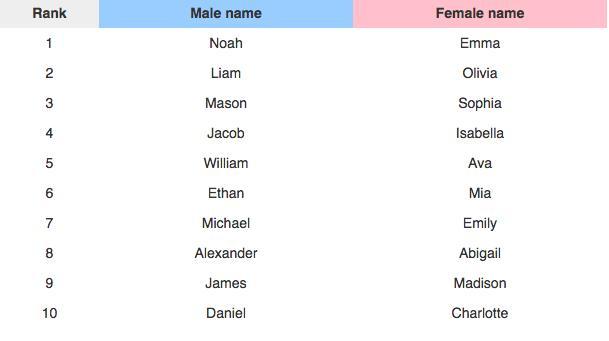 WASHINGTON, May 9 (UPI) — The Social Security Administration on Friday released released the top 20 baby names of 2014. Noah topped the list for boys and Emma was the top name for girls.

Noah has been among the top 10 since 2009, only reaching the number one spot for the first time in 2013. Emma is far more popular, having been in the top 10 for 13 years. The well-liked female name bounced between the first three spots since 2003 after first making the list a year before.

Among other popular names are those of the timeless variety for males — William, Michael and Alexander. Female names have fluctuated a bit more in past years. Emma hasn’t seen the top spot since 2008, and Charlotte, coming in at No. 10, hasn’t been on the list since it started in 1880.

Another newcomer is James. Although it hasn’t reached top 10 status in the last ten years, it is the highest ranked name for males for the last 100 years. Almost 5 million babies were named James since 1915.