ST. LOUIS, Aug. 14 (UPI) — St. Louis County, Mo., ended a state of emergency Friday as calm returned the Ferguson less than a week after protests marking the one-year anniversary of the death of Michael Brown resulted in violence and arrests.

County Executive Steven Stenger issued an order declaring a state of emergencyMonday after dozens of people were arrested in St. Louis while calling for the dissolution of the Ferguson Police Department.

“After reviewing the events of the past four evenings, under the state of emergency, I am pleased to report our law enforcement officers have established order while preventing further acts of violence in Ferguson,” Stenger said in a statement emailed to UPI.

As part of the initial order Monday, St. Louis County Police Chief Jon Belmar was put in charge of the operation of police emergency management in Ferguson and surrounding areas.

The night before the order was issued, 18-year-old Tyrone Harris was seriously injured when police opened fire on him in Ferguson. The incident began when Harris was allegedly running away from an exchange of gunfire with unknown persons. Police began pursuing the Harris in vehicles, which were allegedly shot at several times by the teen.

Police said Harris turned around and shot at the officers as they got out of the vehicles. He continued firing as he then ran toward a fenced area, but was shot multiple times by police, Belmar said.

Police released surveillance video appearing to show Harris holding something in his hand, which police said was a handgun.

Some demonstrators have questioned the wisdom of Stenger issuing an order in the first place. Mary Chandler, who has attended a number of protests since Brown’s death,told NPR county officials were looking for the first opportunity to declare a state of emergency.

“Because it’s like this big surprise all of a sudden there’s a state of emergency,” she said. “But they didn’t tell you that there have been protests going on for a week straight. They don’t tell you that the only time an issue ever arrives is when police come in their riot gear.” 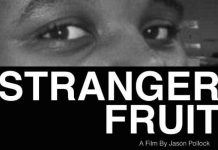 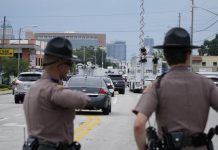