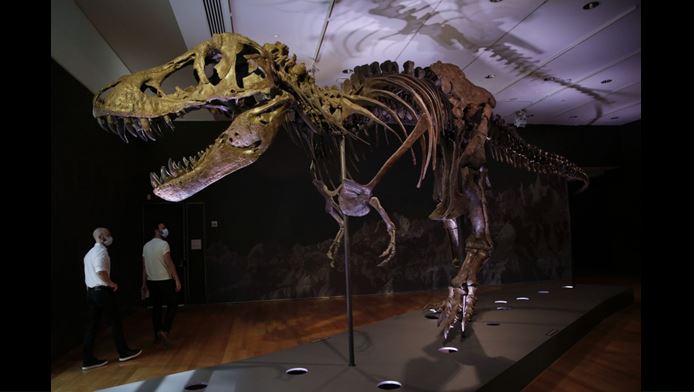 Oct. 1 (UPI) — One of the most complete Tyrannosaurus rex skeletons in existence will be up for sale at Christie’s Auction House next week, when it may set a new purchase record.

The dinosaur, named “Stan,” was discovered in the South Dakota Badlands in 1987. It stands 13 feet high and measures nearly 40 feet long, with a heavy tail.

Stan will be sold as part of Christie’s 20th Century Evening Sale on Tuesday.

“This is one of the best specimens discovered,” James Hyslop, head of Christie’s Science and Natural History Department, said in a statement.

The dinosaur is named after paleontologist Stan Sacrison, who uncovered its remains 33 years ago.

The Black Hills Institute in South Dakota has been studying Stan for the past 20 years and has written numerous reports about its findings. Chicago’s Field Museum bought the most recent T. rex skeleton, named “Sue,” which sold for a record $8.36 million in 1997.

Researchers believe Stan was an imposing figure during his lifetime, weighing seven or eight tons. It had 58 teeth — some as long as 11½ inches, which helped the dinosaur eat as many as 500 pounds of meat.

A 2005 reproduction of Stan’s skull, to recreate his bite force, determined it was strong enough to crush a car at four tons per square inch.

Paleontologists at the University of Southampton, which studied some of Stan’s bones, believe the dinosaur lived during the Cretaceous period about 115 million years ago.