The post touting Mar-a-Lago, President Trump’s privately owned club dubbed the winter White House, has been removed. The State Department apologized for “any misperception” about the post.

“The intention of the article was to inform the public about where the President has been hosting world leaders,” read a message on the Share America website. “We regret any misperception and have removed the post.” 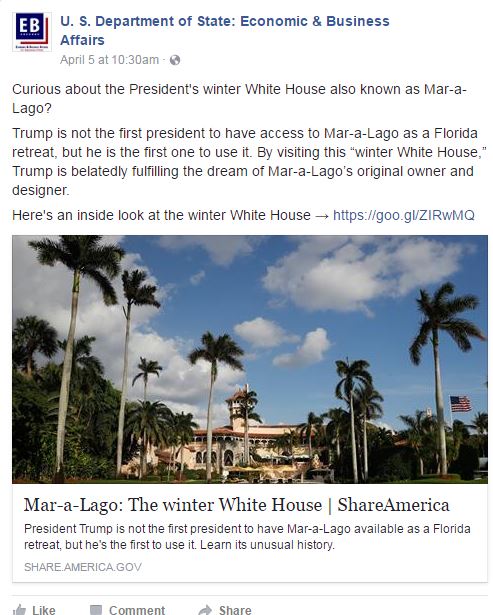 Yes, I am curious @StateDept. Why are taxpayer $$ promoting the President’s private country club?

The post was available on Share America, a State Department program that works with U.S. embassies and consulates in more than 140 countries.

Trump has visited Mar-a-Lago seven times for a total of 25 days as president and entertained foreign dignitaries there, including Chinese President Xi Jinping and Japanese Prime Minister Shinzo Abe.

The watchdog group American Oversight called for an investigation by the State Department inspector general into how the blog post was created.