Approximately 100 students, parents and supporters gathered during a drizzly afternoon at North Community Park in Coral Springs, Fla. — many wearing maroon-colored t-shirts with phrases such as “#DouglasStrong” or “Douglas 17” in honor of the victims — before marching a half-mile to the high school where the shooting took place.

After a somber reading of each victim’s name, Angelina Lazo, 18, a senior at the high school who coordinated the event, gave a speech urging the crowd to keep pushing for gun control, including an assault weapons ban, while criticizing politicians for not acting more forcefully.

Pointing out that Walmart and Dick’s Sporting Goods recently raised the age to buy firearms from 18 to 21, Lazo asked, “We elect candidates to office for the sole purpose of representing the people. Why is it that companies can act, but our elected officials do not?”

“It is time for politicians of both parties to come together and protect us from assault weapons and keep those who are not mentally capable from owning any guns,” she added.

In addition to an assault weapons ban, Lazo said she and other students are calling for for more extensive background checks, an end to the gun show loophole and more funding for mental health.

“They might not take us seriously, but we know more about our Constitution and our amendments than those currently sitting in office,” she said.

The shooting at Stoneman Douglas High School on Feb. 14 sparked another round of the nation’s ongoing gun debate. But those in attendance on Saturday feel that this time the issue won’t fade away.

Helping that momentum is the March for Our Lives rally for gun control in Washington, D.C., later this month.

“This movement is not gonna die,” said Greg Pittman, an American history teacher at Stoneman Douglas. “It’s spreading like wildfire.”

Pittman, a gun owner who believes assault weapons should be banned, said he will attend the rally and has been granted an opportunity to speak to lawmakers face to face.

“I hope I get to speak to Marco Rubio,” Pittman said, referring to Florida’s Republican senator. “The first thing I’ll ask him is why won’t he return any calls.”

In less than a month since the shooting, gun control advocates in Florida have won some gains in a state bill signed by Gov. Rick Scott on Friday that bans bump stocks and raises the age to buy rifles from 18 to 21.

But the bill also allows non-teacher school employees, such as librarians or janitors, to carry firearms as a form of security, which some say only increases the risk, and fails to address assault weapons.

For those marching in solidarity Saturday, the plan is to continue protesting until the weapon that was used to kill 17 people at a high school in their quiet suburb is banned.

“We must keep going a week, a month, a year from now. We must continue fighting for everyone’s safety,” Lazo said. 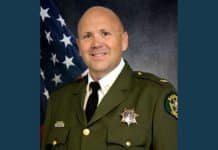 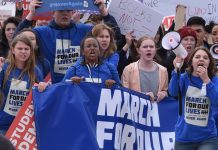