The report by Kaiser Health said Los Angeles County had a homeless population of about 53,000 in 2018, and more than 900 died — a spike of 76 percent over 2017 figures. The study said most homeless aren’t living in shelters.

Some of the deaths occurred in hospitals but most died in public — on sidewalks, in alleys, parking lots, riverbeds and freeway on-ramps. Blacks account for fewer than 10 percent of Los Angeles’ population but represented nearly a quarter of the deaths last year.

“It’s a combination of people who are living for a long time in unhealthy situations and who have multiple health problems,” said Michael Cousineau, a professor at the University of Southern California’s Keck School of Medicine. “There are more complications, and one of those complications is a high mortality rate. It’s just a tragedy.”

“We need to take action now,” said Rev. Andy Bales, CEO of the Union Rescue Mission shelter on the city’s infamous Skid Row. “Otherwise next year, it’s going to be more than 1,000.”

Drugs and alcohol played a direct role in at least 25 percent of deaths in the last five years, but the number could be much higher, an analysis of the county coroner’s data shows.

“This shouldn’t be happening, and many of these deaths could have been prevented with better access to healthcare and housing,” said David Snow, a sociology professor at the University of California-Irvine. “If you are on the streets, you are not getting the attention you need.”

Mental illness is another factor that’s not always attributed to homeless deaths. One man who died last year, 59-year-old Stephen Rosenstein, was diagnosed with schizophrenia and manic depression but never sought treatment. His cause of death was attributed to traumatic injuries from being hit by a car. 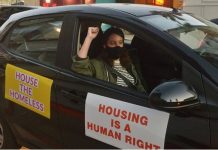