June 15 (UPI) — Oregon State University researchers found that the use of recreational marijuana is on the rise among college students since the state legalized the drug.

Voters in Oregon approved legislation to legalize recreational marijuana in 2014, and the law took effect in 2015.

Researchers who conducted the new study, published June 14 in the journal Addiction, found the increase was largely among students who also reported heavy alcohol use.

“It does appear that legalization is having an effect on usage, but there is some nuance to the findings that warrant further investigation,” David Kerr, an associate professor in the School of Psychological Science in OSU’s College of Liberal Arts, said in a press release.

“We found that overall, at schools in different parts of the country, there’s been an increase in marijuana use among college students, so we can’t attribute that increase to legalization alone.”

Researchers analyzed data from the Healthy Minds Study conducted by researchers the University of Michigan which is a national survey of college student’s mental health and well-being, including substance use.

Participants were asked about marijuana and cigarette use in the previous 30 days and the frequency of heavy drinking in the past two weeks.

Researchers used data from a large public university in Oregon and six other four-year universities around the country where marijuana is not legal, and compared rates of marijuana use before and after marijuana was legalized in Oregon.

Overall rates of marijuana use increased across the seven schools, binge drinking rates remained the same and cigarette use declined during the study period.

“It’s likely that the rise in marijuana use across the country is tied in part to liberalization of attitudes about the drug as more states legalize it, for recreational or medical purposes or both,” Kerr said. “So legalization both reflects changing attitudes and may influence them even outside of states where the drug is legal.”

The study found marijuana use rates were higher among males and students under the age of 21, the minimum legal age for purchasing and using marijuana. 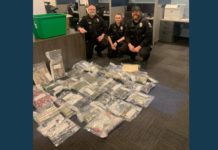