SEATTLE, Aug. 27 (UPI) — While global life expectancy has climbed by more than six years, most of those years are not all that enjoyable because of nonfatal conditions and disabilities, according to a new study.

The increase in years lived is a significant improvement based on reductions and eradication of diseases, especially in developing countries, researchers said. While all communicable diseases have decreased, the focus on HIV and AIDS has had an especially strong effect.

“The world has made great progress in health,” said lead author Theo Vos, a professor at the Institute of Health Metrics and Evaluation at the University of Washington, in a press release. “But now the challenge is to invest in finding more effective ways of preventing or treating the major causes of illness and disability.”

Researchers used data from the Global Burden of Disease Study 2013, which measured age-specific mortality, years of life lost due to premature mortality, years lived with disability and healthy life expectancy for people in 188 countries around the world.

The countries with the highest life expectancy were Japan, Singapore, Andorra, Iceland and Cyprus, while those with the lowest expectancy were Lesotho, Swaziland, Central African Republic, Guinea-Bissau, and Zimbabwe.

From 1990 to 2013, health loss due to HIV and AIDS increased globally by 341.5 percent, however the researchers said that global focus on the disease since 2005 has reduced health loss by 23.9 percent. The leading causes for declining health around the world were ischemic heart disease, lower respiratory infection, stroke, low back and neck pain, and road injuries.

The researchers considered demographic levels such as per capita income, population age, fertility rates, and years of schooling. They said, however, that while they play a role in determining life expectancy and health, approaches to increasing health and decreasing disease in overall populations should continue to be the priority — similar to the approach the world has taken to HIV and AIDS.

“Factors including income and education have an important impact on health but don’t tell the full story,” said Dr. Christopher Murray, director of the the Insititute of Health Metrics and Evaluation. “Looking at healthy life expectancy and health loss at the country level can help guide policies to ensure that people everywhere can have long and healthy lives no matter where they live.”

The study is published in The Lancet. 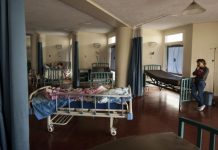